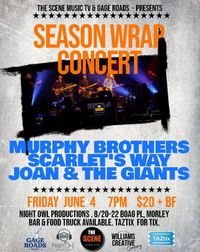 We’re wrapping up season 6 of Perth’s favourite music talk show, The Scene and we’re doing it by featuring some of WA’s best bands, in our custom build studio – LIVE! The Murphy Brothers Scarlet’s Way Joan & The Giants! Join us as we celebrate the best from the West! Bar and food truck will be available. Strictly no BYO. Event will be filmed for broadcast.